We won our TGFBI league!

Here's how we did it 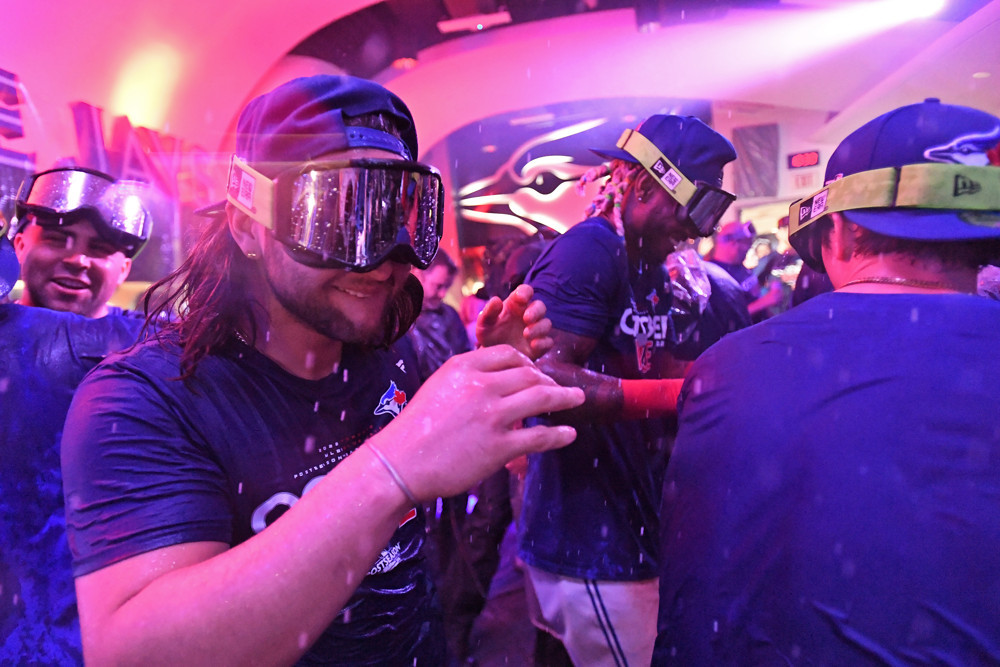 Back in February, John suggested we sign up for The Great Fantasy Baseball Invitational. It was an idea I poo-pooed thinking we wouldn’t qualify since we’re not the most active blog, but he went ahead and applied anyway.

Well, I’m happy to report that not only did we get in, but we won our league! We beat out 14 industry analysts, including heavyweights like Grey Albright, the founder of razzball.com, and Nick Pollack, the founder of pitcherlist.com. We also finished 53rd in the overall competition out of 465 teams.

It was an honor just to get the chance to compete against so many people we look up to. Winning the league was by far the biggest accomplishment of our fantasy baseball careers so far. So how did we do it? This was our process.

After years of playing solely in Ottoneu leagues, we needed to both research strategy and get acclimated to the user experience on the National Fantasy Championship’s website. TGFBI leagues are 15-team, 30-man roster redraft leagues that allow weekly lineup changes (twice weekly for hitters), use FAAB for adding free agents, and don't allow trades. They’re very different from Ottoneu’s 12-team 40-man roster quasi-dynasty leagues with daily lineup moves that use auctions for the draft and free agency and allow trades.

So we set about searching for articles and podcasts about strategy and signed up for another NFC league that drafted before TGFBI. The overarching theme of all of that research was balance. According to the experts, that would be our best chance at winning our league, and having a shot at competing for the overall title. So that was our guiding light as we approached the draft.

The first big decision after being assigned which league we would compete in was on our draft position preference. All NFBC drafts use KDS to decide the draft order. Initially, I suggested setting positions seven and eight as our top two preferred slots as suggested by Ariel Cohen on the Beat the Shift podcast. The reason being it would keep our draft picks further away from each other theoretically allowing us to react to runs on certain positions or statistics in the middle of the draft.

Keeping that in mind, we began to assess the very top of the player pool to see where we felt the talent began to drop off. By the time TGFBI rolled around in February, a clear top five had risen to the top of the hundreds of previous drafts on the NFC site: Trea Turner, Jose Ramirez, Juan Soto, Bo Bichette, and Vladimir Guerrero, Jr. We felt Turner, Ramirez, Bichette, and to a slightly lesser extent Soto, offered the best bets to contribute in all five categories.

After those four, we had concerns about Guerrero’s seeming lack of stolen bases. Like every other news-starved baseball fan, we were salivating over the videos of Ronald Acuna, Jr. who seemed to be recovering more quickly from a torn ACL than maybe anyone ever had before. Prior to getting injured, his 162 game averages, over 1764 plate appearances, were 43 home runs, 32 stolen bases, and a .281 batting average. So even if he missed time, we felt he offered the same balanced production as our top four. That’s what triggered us to change our preference order to 5, 4, 3, 2, 1. We wanted to get one of our guys, whoever fell to five.

A few things worth mentioning before I dig in. John and I quite literally live on opposite sides of the world. I live in America and he lives 12 hours in the future in Asia. Also, there is a four-hour time limit per draft pick in TGFBI. Some managers used very little of that time while others used all of it. These factors often made it difficult for us to coordinate both being awake and online when our pick came up. We eventually fell into a good rhythm, typically discussing a handful of players for each of the next two to three picks. 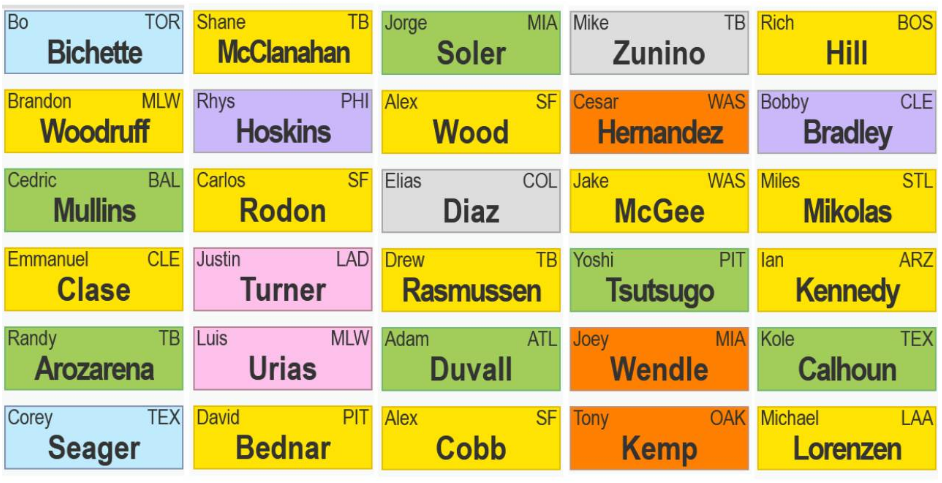 To our surprise, Bichette, Soto, and Acuna were all available to us and we went with Bo. We’ve become evangelists of Eno Sarris’ Pitching+ model and Eno had Woodruff and McClanahan ranked highest when we picked them. We felt like Mullins, Arozarena, Seager, Hoskins, and Turner kept our offense balanced. Some would say Emmanuel Clase in the fourth was too early to take a closer… 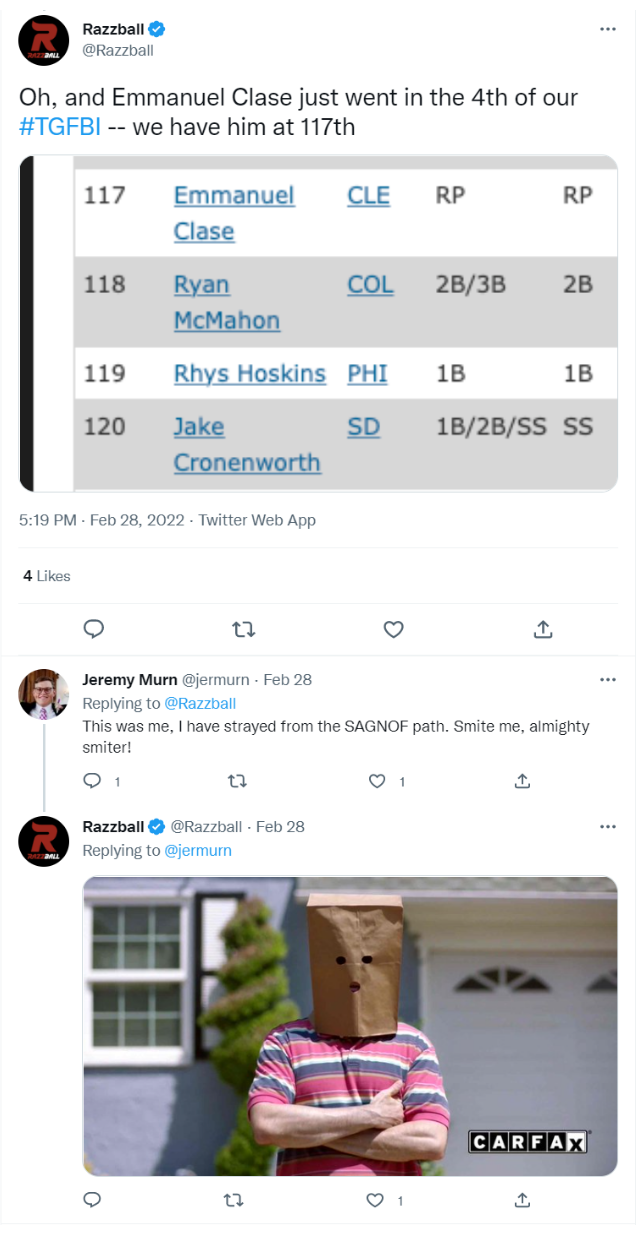 Grey abides by the saying ‘SAGNOF’ which stands for Saves Ain’t Got No Face. He believes it's not worth drafting closers with high draft picks, but closers kept getting pushed up in NFBC drafts throughout the off-season. Heavily influenced by watching his filthy stuff on Pitching Ninja, and again by Ariel Cohen’s advice, based on his research that showed paying up for one of the top closers was probably worth it, I pushed to take Clase. Clase’s final average draft position was 64, we took him 56th overall. He led the league in saves.

THE BAT X had Carlos Rodon ranked as a top 10 pitcher and Eno Sarris ranked him 22nd, but his injury history kept everyone off of him. John had brought him up as a possible choice as high as the Seager pick and we couldn’t believe it when he was still available to us at 131st overall, nearly 20 picks after his ADP. That was the pick that we felt could really be a game changer.

Our best late round pick was Drew Rasmussen by far. Sarris had him ranked 44th I believe and his next highest pitcher that was available was in the 70s. The pick set off some discussion in the league’s private twitter chat about whether Rasmussen was even a starter and, if he was, would the Rays let him pitch beyond the fifth inning.

TGFBI uses 1,000 “dollar” budgets for FAAB and transactions process once a week at 10 p.m. ET on Sundays. From all of the advice we took in, it all boiled down to two main points: use all of your FAAB budget and use most of it early in the season. There’s simply no advantage to leaving “money” on the table and players you sign early could have a significant impact on your team for the rest of the season and this advice rang true for us.

On May 15, five weeks into the season, we sat in sixth place, just barely in the top half of the league. We were feeling antsy and like it was time to make our move. By then many of the top prospects had been called up, but George Kirby and Alek Thomas had joined their MLB clubs in the last week. From what we gleaned from the experts, Kirby felt like an extremely polished major league-caliber pitcher while Thomas was toolsy and was going to get the chance to play everyday.

Again wanting to get our guy, as we talked and thought more about it, our bids for both players kept going up and up and up. We finally settled on 253 for Thomas… and 473 for Kirby. A bid earlier in the season had gone north of 300 so we started there and adjusted for inflation. The next highest bid for Kirby was 369, so while it wasn’t perfectly optimized, we were right to boost our bid significantly. While Thomas didn’t pan out, Kirby will finish in the top five, possibly top three, in AL Rookie of the Year voting.

Two weeks later, on May 29, we signed Jon Berti for 3. He stole a base each of the previous days, but had spent most of May on the IL. He’s always been a ‘rabbit,’ a player who steals a lot but does very little with the bat. What intrigued me about him was over his first 50 plate appearances before getting injured, he was slugging the ball to the tune of a .990 OPS / .427 xWOBA / 182 wRC+. He didn’t hit another home run, but from May 30 on he had 12 more steals than the next highest player (Arozarena, who had 25, and Mullins was next at 23).

Just two of our top 10 picks, Woodruff and Turner, spent time on the IL and they both still logged full seasons. Our ridiculously good luck with health meant we could look ahead in FAAB without constantly having to patch holes as well as be patient with players we thought were talented, but didn’t perform right away. We picked up Nolan Gorman April 24 and O’Neill Cruz on May 8. Gorman spent nearly a month on our bench and Cruz nearly two months.

Our two biggest problems throughout the year were finding consistently good catchers, which we were never able to do, and finding a consistent third closer. We finally found one on July 10. Alexis Diaz had been added and cut previously as the Reds took forever to put him in the role despite him being the only competent pitcher in their terrible bullpen. He was key to helping us finish second overall in saves.

If you’ve stuck around this long, you probably guessed that we won on the strength of our dominant pitching and speed and you would be right. We were tops in strikeouts, WHIP, and stolen bases and second in wins, saves, and ERA. We ended up middle of the pack in runs, home runs, and RBI… and second to last in batting average. While we ultimately won with an unbalanced team, I still think attempting to draft a balanced team was the right strategy because it gave us more than one path to victory.

And there it is, that’s how we did it. It was quite the journey for us and one that we’re excited to build on in 2023 and beyond.